Discussion on Peterborough United only.

Tough game. We'll be lucky to get a draw.
Learn from yesterday, live for today, hope for tomorrow - Albert Einstein
Top

From the Pompey News
https://www.portsmouth.co.uk/sport/foot ... -1-9165381
Nathan Thompson's admission as he prepares for Portsmouth return with Peterborough
Nathan Thompson is bracing himself to come in for Fratton flak.
The right-back conceded he’s likely to be given an unwelcoming reception when he returns to Pompey with Peterborough on Saturday.
Thompson departed the Blues at the end of last season after making 78 appearances and scoring one goal.
Kenny Jackett’s side’s failure to reach the Championship meant the defender turned down a new deal and tried to find himself a club in the second tier.
With a move failing to come to fruition, however, Thompson joined League One rivals Peterborough on a free transfer in August.

Th ex-Swindon captain admits there’ll be no hiding place for him at PO4 – but he’s confident the boo boys won’t impact his performance.
Learn from yesterday, live for today, hope for tomorrow - Albert Einstein
Top

Also from the Pompey News
https://www.portsmouth.co.uk/sport/foot ... -1-9164141
The striker Portsmouth fans heard so much about - and will finally get a glimpse of when Peterborough visit Fratton Park.
He was the striker the Fratton faithful heard about so much.
During the summer of 2018, you could scarcely get away from the name Mo Eisa.
He dominated the headlines and was the hot topic of conversation during the transfer window.

Now 18 months later, Pompey fans will finally get a first glimpse of him when Peterborough visit Fratton Park on Saturday.
Against the backdrop of 25 goals in his maiden Football League campaign for Cheltenham in 2017-18, the former non-league hotshot was in popular demand.

The Whaddon Road side's gamble of plucking Eisa from Greenwich Borough in the Isthmian League division one south paid dividends and his exploits for a side that finished 17th in League Two meant it was inevitable he’d continue his trajectory up the pyramid.
The Blues were in pursuit for a protracted period but were beaten to the chase by Championship side Bristol City, who paid a reported fee of £1.5m
Eisa struggled to acclimatise in the Championship. He made just six appearances for the Robins, didn’t break his goal duck and wasn’t handed an outing after December 2.
Eisa would drop into the third tier when he was recruited by Peterborough for a club-record fee of more than £1.25m.

And the Sudan-born ace has gone on to form a deadly three-pronged attack with Ivan Toney and Marcus Maddison at London Road.

The Posh have bagged 40 goals in the league so far, with Eisa presently the 14-goal top scorer from 22 appearances in all competitions
Learn from yesterday, live for today, hope for tomorrow - Albert Einstein
Top

And from the Portsmouth Official site
https://www.portsmouthfc.co.uk/news/201 ... sive-test/
MacGillivray: A Massive Test
Keeper looking to deny free-scoring Posh
Pompey’s hopes of automatic promotion came unstuck against Peterborough near the end of last season.

A 3-2 defeat at Fratton Park in the penultimate fixture consigned the Blues to an ultimately unsuccessful play-off quest.

Posh come to town again on Saturday, sitting third in the table and having scored more goals than any other League One side.

Craig MacGillivray will be tasked with keeping out their prolific forwards, as the hosts look to extend their six-match winning run.

The keeper said: “There’s no getting away from the fact that was a massive game for us at the time and it ultimately knocked us out of contention for the top two.

“I suppose we can use that as motivation, while there’s also the chance to claw them back in the league.
Learn from yesterday, live for today, hope for tomorrow - Albert Einstein
Top

Lots of injuries and sickness 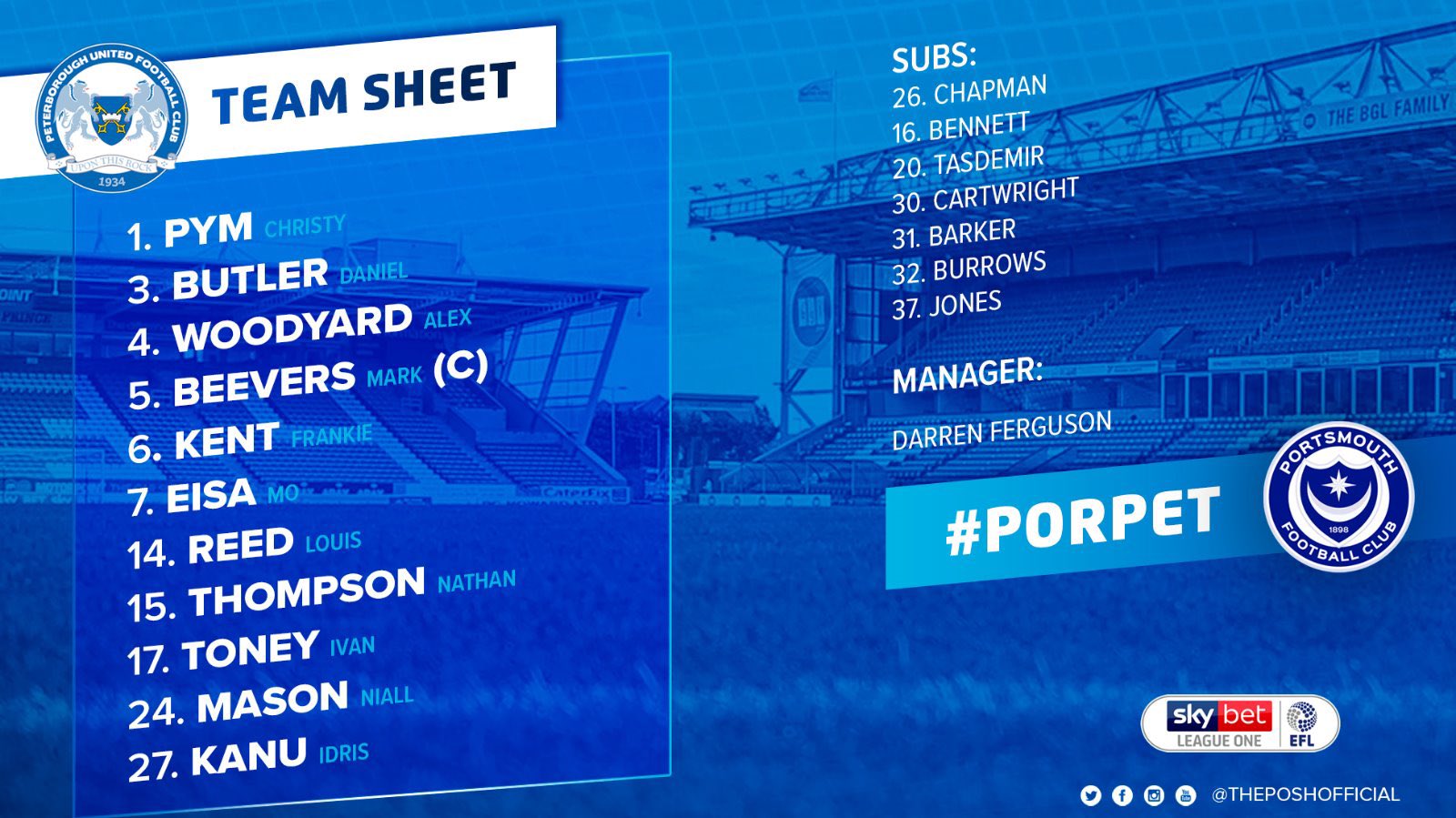 When you are dead, you don't know you're dead.
It's difficult only for the others.
It's the same when you are stupid
Top

Posh took the lead early on but Mr Brakespear got an equalizer after about 25 minutes, in fact, Mr Brakespear could go on and win this for Portsmouth
When you are dead, you don't know you're dead.
It's difficult only for the others.
It's the same when you are stupid
Top

Wycliffe must be fuming at the performance of his mate Charlie Breakspear.
After 60 minutes it's 2-1
Learn from yesterday, live for today, hope for tomorrow - Albert Einstein
Top

2-2 it is.
Well done Posh.
And I'm not saying that just because poshaussie predicted-
Portsmouth 2-2 Posh (Toney, Eisa)

With an unbiased referee I think we'd have won that, absolutely scandalous.
When you are dead, you don't know you're dead.
It's difficult only for the others.
It's the same when you are stupid
Top

If Pym hadn't handed them an easy goal we'd have won.
Learn from yesterday, live for today, hope for tomorrow - Albert Einstein
Top

So did I, wasn't confident at the time

A brilliant point by Posh considering all the circumstances.
'Fear is the path to the dark side. Fear leads to anger. Anger leads to hate. Hate leads to suffering'.
'No! try not. Do, or do not. There is no try.'

Return to “The Posh”